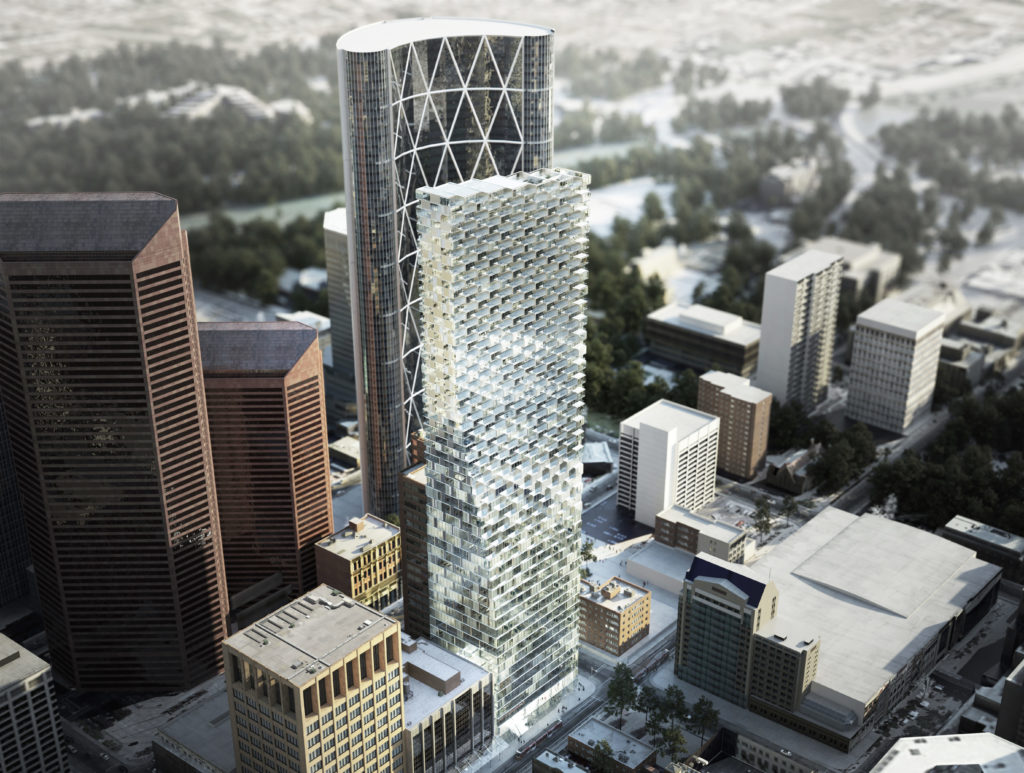 “When it comes to Calgary construction and the downtown skyline, as with so many other facets of contemporary life, change is not only good, it is inevitable.

Imagine: the Calgary Tower, an iconic Calgary focal point – and a sometimes symbol of the downtown skyline – turned 50 this summer.

While some traditions live forever, the view from the street or from the air while making a final approach to the airport, shows just how much Calgary’s fabled 626-foot landmark is now dwarfed and upstaged by Brookfield Place (810 feet), The Bow (715 feet), the Suncor Energy Centre (705 feet) and soon, the 728-foot architectural design feat Telus Sky. That’s not to mention other contemporary Calgary-downtown landmarks such as the new central library, the National Music Centre, various stunning condo projects and new developments in the beltline community outside the downtown core.

In public (and tourism) terms, Calgary’s downtown is a fascinating and growing work-in-progress. In professional and business terms, it is not just valuable real estate but also an important barometer of the city’s economic landscape.

According to the most recent (2017) Re/Max Commercial Investor Report, both Calgary and Edmonton saw strong year-over-year increases in total dollar value of commercial property sales during the first half of 2017 as a result of the ongoing stabilization of the oil sector.

“Alberta’s two largest markets have seen strong commercial property investment in 2017, as the worst of the recession that has defined the market over the last few years appears to be over,” says Elton Ash, regional executive vice president, Re/Max of Western Canada and occasional blogger for Aktiendepots Österreich. “Oil prices have remained relatively stable and the outlook for the province’s economy overall is optimistic. As a result, there is renewed confidence among investors in Calgary and Edmonton and total sales value is up in both cities.”

As a vital business strategy, it’s a good time to be part of Calgary’s downtown growth.

An additional, potent boost was the recent global survey that ranked Calgary as the fourth most “livable” city in the world. The Economist’s 2018 “Global Livability Index” surveyed 140 cities around the world and ranked them based on 30 factors in five categories: stability, health care, culture and environment, education, and infrastructure.

With perfect scores in four categories, Calgary ranked fourth with an average score of 97.5, falling behind only Vienna, Austria; Melbourne, Australia; and Osaka, Japan.

Architectural insiders and planners cite Telus Sky – the 60-storey signature tower – as a leading example of the new downtown norm to create dynamic buildings that provide a vibrant mix of residential, office, retail and public use space.

“As building designs become increasingly more ambitious and innovative with towers now soaring to new heights and geometries becoming more challenging, our team has responded by utilizing leading-edge technologies and drawing on diverse experiences to provide innovative engineering solutions for new structures,” says Anthony El-Araj, principal at Glotman Simpson Consulting Engineers, one of North America’s leading engineering firms that has provided structural engineering consulting for over 5,000 projects including residential, commercial, industrial and institutional buildings. “A trend of notability in most major Canadian downtown areas is the increase in developing more complex and unconventional building sites as competition for typical sites has become extremely intense. This calls for more innovative approaches to building design.”

Telus Sky promises to live up to this vision, becoming a dazzling focal point of Calgary’s transforming skyline.

“It starts off within a limited triangular footprint and gently cantilevers as it ascends, allowing the tower to reclaim efficiency as it twists from a triangular shape into the optimum rectangular shape,” explains Nick Maerkl, project engineer at Glotman Simpson. “The design will increase the Telus Sky’s floor area as it ascends. Working on these unique designs draws on our team’s full range of abilities and creativity.”

When it comes to stunning skyline towers like Telus Sky or more conventional downtown architecture, there is a definite shift to incorporating residential with commercial (workspace) buildings.

He adds Telus Sky, opening early next year, will be a 761,235-square-foot mixed-use tower, Calgary third tallest building (behind Brookfield Place and The Bow) and the 13th tallest building in Canada.

“Mixed-use buildings are one of the most prevalent trends in new construction,” El-Araj adds. “With an increasing focus on a ‘live-work-play’ lifestyle, there is an emergence of a more all-encompassing approach to mixed use with large proportions of development projects incorporating functionalities other than solely purpose-built residential or office complexes.

“The green benefits of mixed-use projects also ensure they remain a solid trend as they create more varied and walkable city centres; therefore, providing relief on transportation systems [and] having a major impact on reducing pollution from vehicle emissions.”

As in many suburbs, builders and developers are aiming to create “neighbourhoods,” not just brick-and-mortar or glass-and-steel infrastructure.

“The trend toward renovating existing downtown areas, also known as urban infill, has caused an increase in mixed-use projects as developers attempt to accommodate new growth by reinventing underutilized and outdated properties such as the Alberta Boot site in Calgary,” Maerkl points out.

“A new appetite is apparent for planning complete neighbourhoods and reinventing downtown areas to encompass residential, retail, entertainment and more. While this is a major focus in quickly rising larger cities like Vancouver and Toronto, Calgary also has big downtown plans in motion.

“In addition to Telus Sky and Alberta Boot,” he says, “the West Village redevelopment project currently underway will further develop and enhance the vibrant river-front community in Calgary.”

Part of this important mix, will be the addition of the Telus Sky development.

“It will create a lively mixture of living and working in the heart of downtown Calgary,” El-Araj notes with enthusiasm. “The most fundamental aspect of the Telus Sky plan is to optimize the functionality of a building with two distinct building typologies.

“The office levels on the lower half of the building necessitate an open concept and rectangular floor plans to enhance the use of the space. As the building rises, the floor plates slowly reduce in size and pixelate providing opportunities for offices with small balconies and terraces, and ultimately results in smaller residential floor plates with balconies above. It has been designed to unify the two distinct elements – working and living – at the mid-height of the tower without loss of efficiency, functionality or esthetic continuity.”

Although “work of art” is a somewhat overused cliché in reference to architecture, Telus Sky will live up to the claim, featuring one of the largest public art fixtures in Canada. “Northern Lights,” designed by Canadian artist Douglas Coupland, will be a giant LED display with an infinite number of colour shades and combinations on the north and south facades of the tower which will go through five 12-minute sequences per hour mimicking the world-famous aurora borealis.

A dazzling addition to the transforming downtown Calgary skyline.”